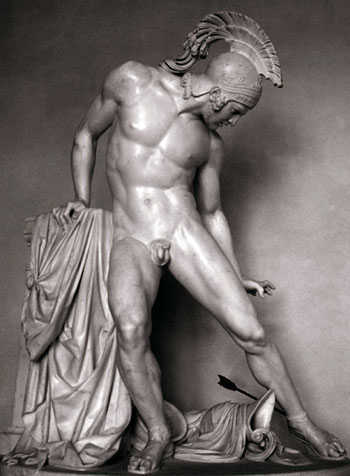 Aries is the fiercest of the Zodiac signs, bursting out at the vernal equinox, when spring commences. That brings courage and the will to test it. Aries is the Archetype of the warrior, who jumps to a challenge and fears no adversary. 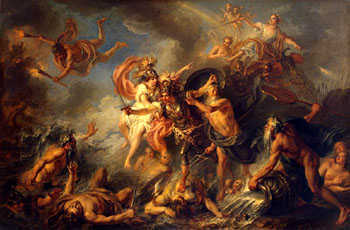 The Fury of Achilles. Painting by Coypel 1737.

An excellent representative of the Aries archetype is Achilles, the Greek hero who defeated any enemy, without mercy, and was invulnerable except for the heel of one of his feet. On the statute above (a Roman sculpture at Villa Reale), that’s where he is struck by an arrow.

Aries gladly takes risks, needing it to feel alive – even when that increases the risk of a fatal outcome. It’s the necessary attitude of a warrior: rushing into the battle as if overcome by rage, confident of being as close to invulnerable as Achilles. Forgetting about the heel.

This daring attitude of Aries is explained by the sun entering the sign at the very spring equinox, when daylight conquers the night and summer is within reach. Also, the ruler of Aries is Mars, the planet named after the Warrior God (Ares in Greek). Nothing else would do for Aries. At spring, one should spring into action.

The old Greeks praised the warrior archetype. The fearlessness and readiness to do battle was an ideal for both men and women. This was true for just about all the civilized world at that era. And when the Romans conquered Antique Greece as well as most of the rest of the known world, they proved to favor the same ideal. None met higher praise than the warrior.

The Age of Aries

That didn’t change until the next era began in Europe – that of Christianity, the religion of the meek and peaceful. It was also a start of a new Astrological Age: the Age of Pisces, when belief and the quest for spiritual salvation became the norm. Read more about it here:

The Age that ended with the birth of Christianity was the Age of Aries. It had ruled for two-thousand years, approximately from 2000 BC to the beginning of the Christian Era. During that long time, the archetype of Aries set the scene and acted on it. Wars were ended only by other wars beginning, the cultures and the arts were obsessed by it, even the gods were believed to be at war from the dawn of time.

Vicious warriors were admired, whereas the few who dared to speak of peace were regarded as blasphemous and often violently put to death.

The element of Aries is fire. It stands for activity – eager and impatient activity, sometimes furious. Aries shares that element with Leo and Sagittarius, but Aries is the cardinal fire sign. That’s the most impatient and challenging one, who prefers to act before any order has been given. Well, Aries really only obeys Aries. It’s an ally not to be taken for granted, but as an enemy guaranteed to be just that.

As civilization has grown more peaceful than it ever was in the Age of Aries, this Zodiac sign can be frustrated and often feel out of place. Aries longs back to the days of the legendary heroes.

There are challenges today, too – in sports, in business, and so on. There are wars as well, alas. The archetype of Aries will never be completely obsolete. But it takes twenty-thousand more years before it’s back on the throne and the altars of the temples.

We need the intermission. 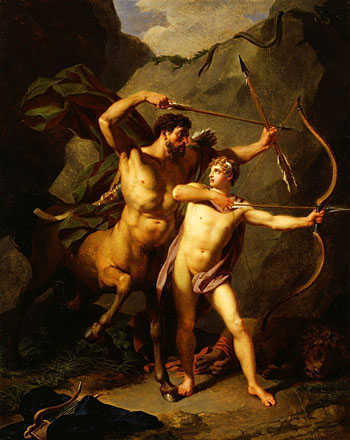 Young Achilles being taught by the centaur Chiron. Painting by Regnault, 1804. The centaur with his bow and arrow is the traditional symbol for the Zodiac sign Sagittarius, which is a fire sign like Aries.