You’ve heard that we’re entering the Age of Aquarius, but that’s still some 150 years ahead. We live in the Age of Pisces, and have done so for 2,000 years. It’s the age of religion, and its final stage is increasingly fanatic.

Western astrology has an annual starting point in the Spring Equinox, March 21, which is when the sun enters Aries. But the latter is not exactly true. The Earth wobbles slowly as it spins around its own axis, which makes the Spring Equinox move around the whole Zodiac. It’s called the precession of the equinoxes.

One such rotation around the Zodiac takes about 25,870 years. That means it travels through one Zodiac sign in almost 2,160 years. The movement is backwards, so it goes from Aries to Pisces to Aquarius, and so on. That’s why we talk about astrological ages.
Each era of about 2,160 years is signified by the characteristics of the Zodiac sign where the Spring Equinox actually takes place.
Right now, the Spring Equinox is at the beginning of the sign Pisces, which means that we are getting to the end of the Age of Pisces. When the Equinox moves into Aquarius, the Age of Aquarius begins.
Since we base our years on the (mistaken) birth year of Christ, it’s safe to say that the year 1 CE (there is no year 0) is the starting point of the present era, the Age of Pisces. So, we have lived in this era for a little more than 2,000 years, and the next era, the Age of Aquarius, will begin approximately in the year 2160.
Its starting point is not likely to be at a certain day, not even a specific year – at least not how it’s perceived when it comes. The change is vast and complex, so it will take its time – both before and after the year 2160.
But we’re definitely not there yet. We have not entered the Age of Aquarius. We’re at the end of the Age of Pisces, which is one where the characteristics of Pisces forcefully struggle to stand their ground, in a battle against the characteristics of Aquarius.

Pisces stands for faith, belief, sacrifice, and religion. Aquarius represents thought, contemplation, innovation, and science. In the movement from the former era to the latter, religion battles science.
This is very evident in our present world. We might have thought that science triumphed already by the discoveries of Newton, Darwin, Einstein, et al. But these last few decades we see religion making an aggressive fundamentalist comeback, as if we have to choose between the two cosmologies, although they really speak about completely different things, with completely different languages.

Christianity and the Fish 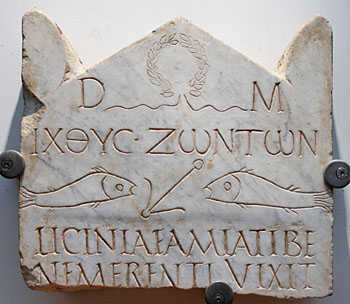 Pisces is the sign of the Fish, of course, and during the past 2,000 years of Christianity the fish has been an essential symbol to Christians. This started way back in the early days of the religion, when Christians were persecuted and needed to hide their belief from the world.
They used the symbol of the fish as sort of a secret sign among each others to mark their Christian faith. Fish is “ichtys” in Greek, and in the Christian use it was an acronym for (in Greek): Iesous Christos, Theou Yios, Soter. This translates Jesus Christ, God’s Son, Savior.
Rather than writing the word, they used simplified fish images. See for example the funerary stele below, from the early 3rd century CE. It has two fish, just like the astrological symbol for Pisces.

The Three Periods of an Era

As the Spring Equinox travels slowly through a Zodiac sign, that era goes through three main stages that correspond to the three qualities of the Zodiac: cardinal, fixed, and mutable. A Zodiac sign can have either of the three qualities. Pisces is mutable, whereas Aquarius is fixed.
But also, every sign can be divided into three parts, each spanning ten of the thirty degrees of the sign. They are called decans, which comes from the Greek word for ten: deka. So, the first ten degrees of a sign belong to the cardinal decan of it, the eleventh to twentieth degree are in the fixed decan, and the twenty-first to thirtieth degree are in the mutable decan.
The cardinal quality is one of leadership, of boldly moving on in the direction of one’s own initiative, demanding others to follow. The fixed quality is that of one who remains where he’s at, unwilling to lead and equally unwilling to follow. The mutable quality is that of the follower, who seeks others up and goes where they point, even it it leads to personal sacrifices.
Pisces is a mutable sign, but its three decans still have their own tendencies – although none of them is more typical in its characteristic than the mutable one, because it’s in accord with the general quality of the sign Pisces.
Still, an era can be described as a process through the three decans, where each takes slightly more than 700 years. Since the Spring Equinox moves backwards through the Zodiac, these decan periods also go backwards. The first period of an era is the mutable one, next the fixed, and last the cardinal one.
This means, generally speaking, that an era starts by searching for its identity, in a process taking 700 years or so. The next 700 years, it’s established and remains quite conservatively in this state of affairs. The last 700 years, it’s increasingly involved in battles to remain and keep its dominance – in vain, of course, since a new era will come. But the process is both noisy and costly.

Three Phases of the Religious Era

The Age of Pisces can be divided accordingly. The first period of the Christian era, until about 720 CE (but it’s not that exact), the religion gradually found, explored, and established itself. It was a time of excited religious speculation, where lots of people were willing to make great sacrifices for the sake of it. This period of the Age of Pisces was the most inspired and significant one, because Pisces is a mutable sign. 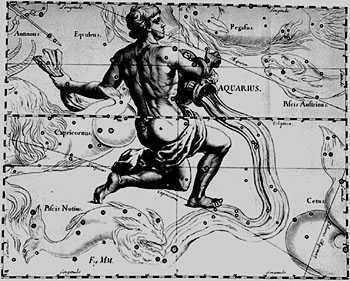 During the second period of the Age of Pisces, circa 720-1440, the Christian religion was well established and very powerful. It controlled society, without being that much questioned or opposed. European society was solidly Christian, ruled by its teachings, and this seemed to have the power to go on forever.
In the third period, circa 1440-2160, the existing religious cosmology and world order is increasingly questioned and needs to defend itself with more and more force. This is what we see around us. Scientific perspectives challenge the religious paradigm, and religion responds by challenging science. It’s also true for politics and every other aspect of civilization – religion opposes all alternative lines of thought.
Since the coming era is the Age of Aquarius, where reason and science are the ideals, the religious powers will aim their battles at just that.
The fundamentalist questioning of Darwin’s theories is just one of the examples of this. It started way before 1633, when the inquisition demanded of Galileo to deny his astronomical findings. Copernicus had suggested a heliocentric universe (with the sun, and not the Earth, in the center) a hundred years earlier. Even more important was the rediscovery of the Greek philosophers at the end of the Middle Ages, stimulating scientific thinking instead of blind belief.
From the Renaissance and on, religion has been increasingly questioned, particularly from a scientific standpoint. This is expressed in the anecdote about Napoleon asking Laplace why he did not even once mention God in his book about the mechanics of the universe. Laplace replied: “I had no need of that hypothesis.”
The religious world order is struggling for its life. The closer we get to the grand finale, which is the start of the Age of Aquarius, the more desperately religion will fight that change.

The Age of Aquarius Will Not Be Perfect

The coming 150 years will be adventurous, to say the least. The main conflict, between religion and science, will be severe to all. There’s no doubt who will eventually triumph, but there will be very strong powers refusing to accept it. At times, they may even seem to be winning. They are not. Actually, each of their victories creates nothing but the next reason for their coming defeat.
The Age of Aquarius is no picnic, either. It has its advantages, compared to the Age of Pisces, but also its drawbacks. In that era, knowledge is king. The compassion developed during the Age of Pisces is replaced by the firm rule of reason, whatever the costs. More about that here:

The Age of Aquarius