The above image is the established symbol (also called glyph) for the Zodiac sign Scorpio, the Scorpion. It’s an M with the scorpion tail stinger. Both the Zodiac sign and its symbol have been along for ages.

Already the Babylonians connected the Zodiac sign to the scorpion. That might have to do with the constellation with the same name, vaguely suggesting the shape of a scorpion if some of the stars are connected. See the image below of the constellation Scorpius. The tail goes diagonally down to the left corner, where a few stars mark the stinger, much like an arrow head. 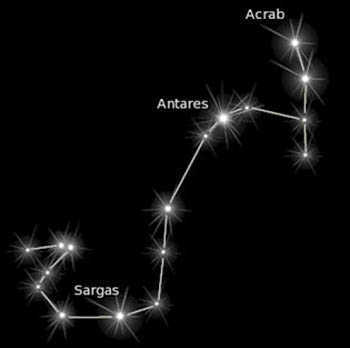 Below is an antique illustration of the same constellation, where the figure of the scorpion has been added. It’s from a 17th century book: Firmamentum sobiescianum, by Johannes Hevelius, 1690. 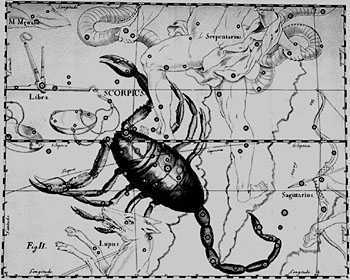 The M of the symbol is not that easy to explain. It might be a Medieval symbol of medicine or alchemy. The M reappears in the symbol for Virgo, another Zodiac sign – see the image to the right.Virgo symbol. I’ve seen theories about the two signs and symbols representing male and female sexuality, but that might be speculation – and still the M is unaccounted for.

Since M is a Greek and Roman letter, this symbol for Scorpio is hardly older than those cultures. I would bet on Medieval times, when alchemy and other metaphysical speculations erupted all over Europe. The mystery would be solved if the Greek or Roman spelling of scorpion contained an M – but no. Not even the Babylonian name for it holds anything near the sound of M.

Unfortunately, a lot of the occult sciences of the past are unclear to us, because of the Scientific Revolution commencing with the discoveries by Isaac Newton in the early 17th century.

Below is an ink version of the symbol for Scorpio, which I did a number of years back in an experiment of using Japanese ink calligraphy (shodo) for old European astrology symbols. I’ve used these pictures on my astrology websites, mainly for fun and for the odd graphic effect, and I’ve seen them copied all over the Internet. I’m fine with that, although I think it wouldn’t hurt if the source was mentioned. Well, what to do?

As for the picture commonly used to represent the Scorpio Zodiac sign, it’s always an image of a scorpion. It’s been like that for very long – probably longer than the symbol described above has existed. Below is one typical example, where the stars of the constellations have also been marked. It’s an illustration from Poeticon astronomicon, a 1482 book by Hyginus. 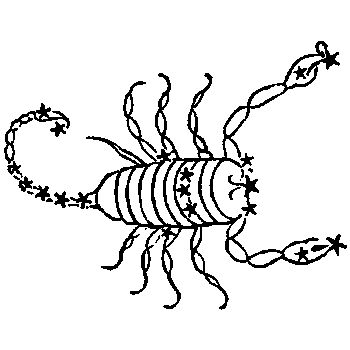 For the header of this website, I played a little with the Scorpio symbol – using the photo of a real scorpion. That might be a bit “creepy” but I’m sure no true Scorpio minds. The background is a theater curtain, as a reminder of the Scorpio archetype: the actor. 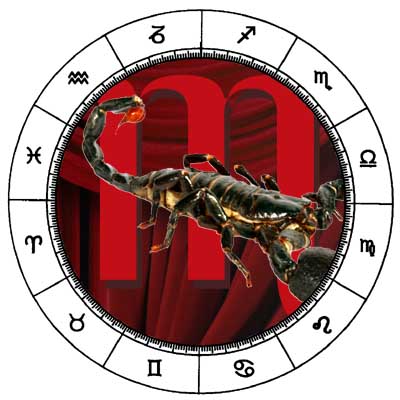