The above image is the established symbol (also called glyph) for the Zodiac sign Taurus, the Bull. It’s a simple representation of the head of a bull, with its horns. Both the Zodiac sign and its symbol have been along for ages.

No Bull at First

The Babylonians didn’t connect this Zodiac sign to the Bull, though. They called the constellation The Steer of Heaven. But already in Classical Greece, the Bull was established as the name of the sign and the constellation.

It’s not that easy to see a bull in the constellation of Taurus. Most images of it mark the horns by connecting a couple of the stars, but that’s about it. The rest is up to the imagination. Several of the Zodiac constellations are equally vague. Here’s the constellation Taurus, with the image of the Bull added to it in a typical fashion: 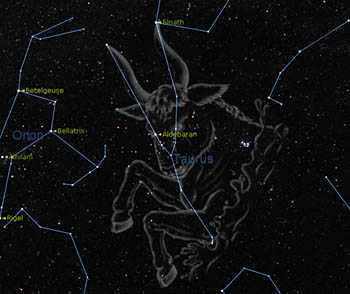 As you can see, the formation of the stars doesn’t support the idea of a bull very convincingly. The reason for the choice is, as far as I know, buried in history.

Below is an antique illustration of the same constellation, where the figure of the bull has also been added. It’s from a 17th century book: Firmamentum sobiescianum, by Johannes Hevelius, 1690. 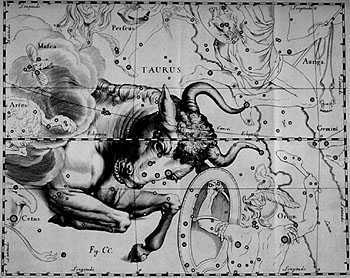 Below is an ink version of the symbol for Taurus, which I did a number of years back in an experiment of using Japanese ink calligraphy (shodo) for old European astrology symbols. I’ve used these pictures on my astrology websites, mainly for fun and for the odd graphic effect, and I’ve seen them copied all over the Internet. I’m fine with that, although I think it wouldn’t hurt if the source was mentioned. Well, what to do?

As for the picture commonly used to represent the Taurus Zodiac sign, it’s been an image of a bull for as long as that has been its name – probably longer than the symbol described above has existed. Below is one typical example, where the stars of the constellation Taurus have also been marked. It’s an illustration from Poeticon astronomicon, a 1482 book by Hyginus. 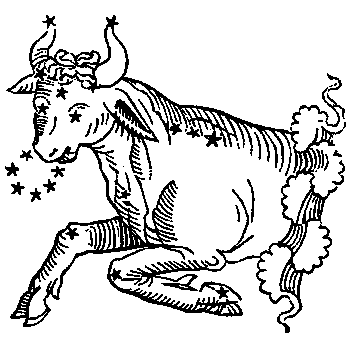 This is a graphic I created where I combined the symbol for Taurus with an image of a bull. Well, actually I think it’s an African water buffalo, but the head and the horns are there. I also added the primary symbol of the Taurus traits: agriculture, in the form of crops on a field. 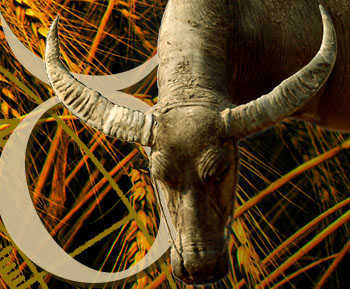