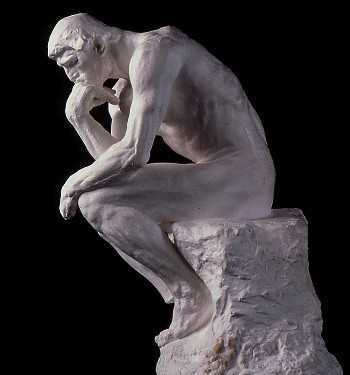 The Zodiac sign Aquarius is about knowledge and learning, the thought process towards increased wisdom. Its archetype is that of the teacher – teaching oneself as well as one’s students. Aquarius celebrates the human brain and all that it can accomplish.

All over the world and in every human culture, since thousands of years, few things receive higher praise than the tradition of one generation teaching the next. That’s how we remain human beings and that’s how civilization can progress. What could be more important? The archetype of Aquarius is precisely about this.

It’s basically a celebration of the fabulous brain we’re equipped with and what it can accomplish. Without it, nothing would set us apart from the rest of the animal kingdom. The wonderful melting pot inside our skulls is where it all begins, and who knows where it will end?

That’s why I chose the famous Rodin sculpture The Thinker from 1902 to illustrate this archetype. The process of contemplation is what produces a teacher. Otherwise, what’s there to teach?

The Aquarius archetype is that of human thought evolving from one generation to the next, through the lifetimes of meditations and inquiries by all individuals forming the chain from a distant past to a distant future. It’s a beautiful thing.

Another image of this essential process is that of the Greek philosophers who were the European pioneers of it. Thales, Plato, Aristotle, and their many brilliant colleagues. Teachers, all of them, understanding fully the great importance of their mission. They were thinkers, constantly, primarily urging their students to be the same.

Cosmos of the Ancients 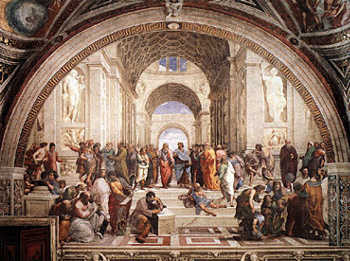 On Raphael’s fresco for the Vatican above, many of the Antique Greek philosophers parade. At the center, of course, are Plato and Aristotle. They all knew their task and the importance of it. That’s the archetype of Aquarius: the Teacher.